With a traditional Hawaiian blessing, the Shidler College of Business at the University of Hawai‘i unveiled its newly renovated Corporate Interview Rooms on September 25 thanks to a $150,000 gift from First Insurance Company of Hawaii, Ltd. (FICOH).

The Corporate Interview Rooms will be used to conduct job interviews and to prepare students for internship opportunities and entry into the job market. The rooms received electrical upgrades, furniture, video equipment for mock interviews, and several large digital monitors to conduct long-distance interviews via Skype.

Last year, over 40 companies held interviews or informational sessions in the interview rooms through Shidler’s “Business of the Week” program. Some of the companies who participated in the program included: PWC Los Angeles, FICOH, US Army Corps of Engineers, Matson, Servco, The Queen’s Health Systems, and Merrill Lynch.

First Insurance’s gift is the first commitment of the Visionary Initiative to modernize key spaces and rooms at Shidler and assures the legacy of our most steadfast alumni and friends with their names. Residual funds after renovations will go towards enriching the general endowment, which serves to provide critical funds for alumni outreach, new programs, and scholarships. “We are extremely grateful to First Insurance for their continued support of our students,” says Vance Roley, dean of the Shidler College. “Every commitment we receive from the private sector will help us provide new resources and opportunities for our students.”

“We and the local business community in general benefit from having a world-class business school in our backyard,” says Jeff Shonka, CEO of FICOH. “Our funding of the Corporate Interview Rooms is another way for us to support this symbiotic relationship.”

Other First Insurance gifts to Shidler include a $1 million endowed professorship in risk management, a $100,000 endowed scholarship, $160,000 to the Pacific Asian Center for Entrepreneurship, and the title sponsorship of Business Night for the past 12 years. 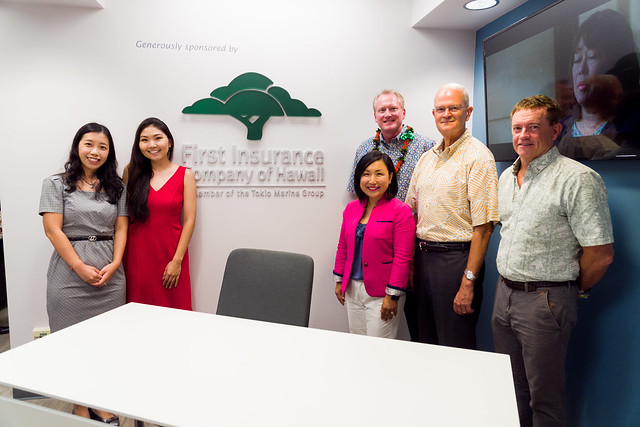