Left to right: Vance Roley, dean of the Shidler College of Business, and Jay H. Shidler, founder and managing partner of The Shidler Group

HONOLULU – The Shidler College of Business at the University of Hawai‘i at Mānoa today announced that alumnus Jay H. Shidler has donated $117 million in cash and real estate ground leases immediately after delivering the final installment of the $111 million gift he announced in 2014. In total, Mr. Shidler has given $228 million to the school – which represents both the largest individual donation in the University’s 110-year history, and is the second-largest known gift to any U.S. business school at a public university. This latest $117 million donation will further fuel the pace of improvements and expansion facilitated by Mr. Shidler’s earlier donations, while providing a level of steady funding that could be used to make the College tuition-free within 40 years, if there is a need or desire to do so at some future time.

The gift of $117 million announced today by Mr. Shidler is designed as a lasting source of capital for the Shidler College of Business and a potential investment model for public educational institutions. Centered upon the donation of land underlying 11 significant office buildings in the commercial business districts (CBD) of major mainland cities – Seattle, Denver, Chicago, Tampa, Nashville, Louisville, Mount Vernon, Charlotte, and Columbus – this gift of land and attendant ground leases is projected to produce highly certain, management-free cash flow that historically increases faster than inflation.

To ensure the long-term nature of his gift, Mr. Shidler has imposed one critical condition – the University is prohibited from selling any of the donated ground leases prior to the end of their 99-year terms. This condition is critical as Mr. Shidler estimates that the ten ground leases will generate a minimum of $2.1 billion of contractual cash flow for the College. At the end of the ground lease terms, the College receives full ownership of the related office buildings, which together with the land will be worth an estimated $5.1 billion. In total, this gift of land and commercial buildings will yield a minimum of $7.2 billion during the life of the current leases. 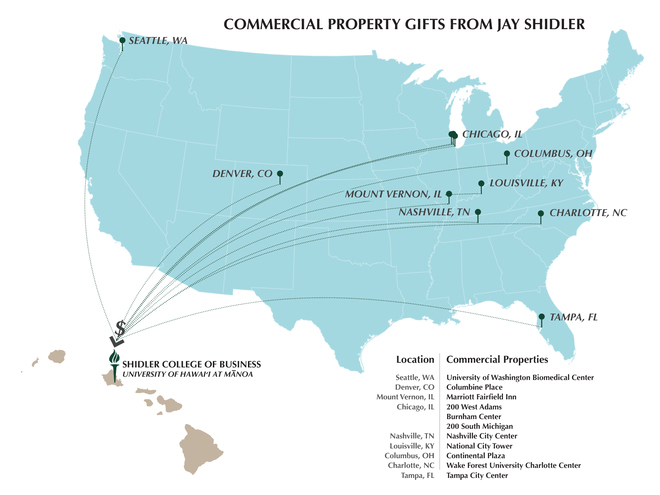 As a 1968 alumnus (BBA) of the University, Mr. Shidler credits the college with preparing him for a successful career in business and his lifelong love of the Islands, where he has resided since 1964.

Mr. Shidler began his philanthropic efforts with the University of Hawai‘i in 2006, with an initial gift of $25 million – that prompted the university to change the name of its business school to the Shidler College of Business. This was followed by several additional gifts over the next few years – including a $69 million gift in 2014 – which brought the total to $111 million.

Since that time, the Shidler College of Business has been recognized for its international undergraduate business program (with a focus on the Asia-Pacific region), placing 16th in U.S. News & World Report’s 2018 rankings. In addition, the school offers the only graduate program in Hawai‘i certified by the Association to Advance Collegiate Schools of Business (AACSB).

“Jay’s extremely generous gifts have already had a transformational impact on the College’s physical structure and academic programs,” said Vance Roley, Dean of the College and First Hawaiian Bank Chair of Leadership and Management since 2005. “While the size and scope of the gift is ambitious, Jay’s commitment to the larger Hawai‘i community, as well as his pride as an alumnus of the school, have been evident for quite some time. We are incredibly excited for the future of the College,” said Dean Roley.

Specifically the gifts will further catalyze campus renovations and expansion in expertise and offerings, which have increased notably since 2006. Since that time, major physical improvements were made to the classrooms and the College’s exterior and common areas for students and faculty were enhanced. The school’s endowments have grown from six to 38, allowing for the recruitment and retention of a world-class faculty, including one of the best marketing faculties in the world. The College has created new academic programs such as the Global MBA (full-time) with country-specific tracks, Vietnam Executive MBA in Ho Chi Minh City and Hanoi, Distance Learning EMBA with Health Care Management Track, and Freshman Direct Admit Program.

Concurrently, the number of scholarships awarded to students also has increased significantly – from 161 to 350 in 2017. In addition, the College has been able to use the gifts to fund undergraduate and graduate teams to compete in national and international business competitions, and hire staff to support internship and job placements efforts.

“I’m the first person in my immediate family to receive a college degree, so my being a University of Hawai‘i grad was a big deal for my mom and dad,” said Mr. Shidler. “As an Army brat, my four years at U.H. were the longest I’d lived anywhere. That stability made the experience significant, and the experience made Hawai‘i my home. After leaving the Army Corps of Engineers, I relied on the education I received at the University, as well as the deep and lasting personal friendships with alumni and faculty, to make my initial real estate investments, and start my own firm.”

“I credit the guidance of my professors and strong connections with classmates at the College with much of my success in the business world. The more students who have access to such an education, the better the business world, and ultimately, our community become,” added Mr. Shidler. “With a strong emphasis on international and Asia-Pacific studies, and a rigorous curriculum, I am looking forward to the next generation of University of Hawai‘i alumni contributing greatly to the international community in both a business and personal capacity.”

Following graduation, Mr. Shidler was commissioned as an officer in the U.S. Army Corps of Engineers. Upon leaving the service in 1971, he formed what would become The Shidler Group, which today invests equity and debt capital in U.S. commercial properties and portfolios, and creates and capitalizes new real estate-related companies.

In 2015, AACSB International (Association to Advance Collegiate Schools of Business) named Mr. Shidler one of the world’s 100 most influential leaders in making an impact on business education, and also recognized him as one of the 50 most generous alumni donors.

Mr. Shidler and Wallette, his wife of 47 years, have a daughter, Summer, and five grandchildren. He is an active trustee of several charitable organizations including The Shidler Family Foundation.

To learn more about the gift and Jay H. Shidler: https://shidler.hawaii.edu/gift

About the Shidler College of Business

Established in 1949 as the College of Business Administration, the College was named in 2006 after alumnus Jay H. Shidler, founder and managing partner of The Shidler Group. The Shidler College of Business is renowned for its expertise in international management education and is consistently ranked among the nation's top 25 graduate schools for international business by U.S. News & World Report.

Long recognized for its Asia-Pacific focus, the College is a professional school, offering a wide variety of degree, certificate and executive programs. The College places a strong emphasis on the development of management skills, entrepreneurship and the management of business information technology. The Shidler College of Business is the only graduate program in the State of Hawai‘i accredited by AACSB International. For more information, visit: shidler.hawaii.edu.

About The Shidler Group

Jay Shidler also has been the founder and chairman of five NYSE-listed public corporations, which collectively have issued more than $14.5 billion of debt and equity securities. 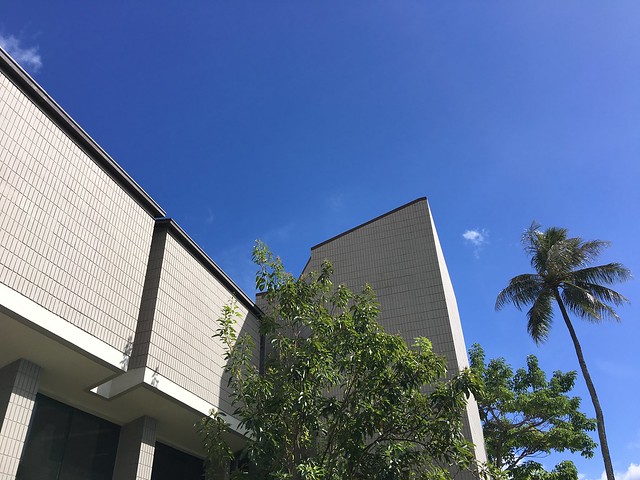