When information management technology associate professor Prasanna Karhade logs into Zoom to teach his two courses at Shidler College, the gallery of boxes on his screen always includes more than his current roster. Former students, colleagues and industry experts invited to class often round out the group. Much like his own journey through academia, Karhade values personal relationships and the connections they can forge.

“I see myself as a bridge and ITM as a major that serves that bridge,” he said. “It’s my job to connect all the functions in a business, including strategy, marketing, accounting and finance. You have to plant the seed and show the students what is possible because they have the energy and enthusiasm.”

Bringing the “real world” to life – and in front of – students is a teaching method that has always appealed to Karhade because it provides the opportunity for open conversation, networking, problem-solving and ultimately, inspiration for a group of individuals who are interested in the same topics. Karhade says these components create a spark, which initiates creativity. 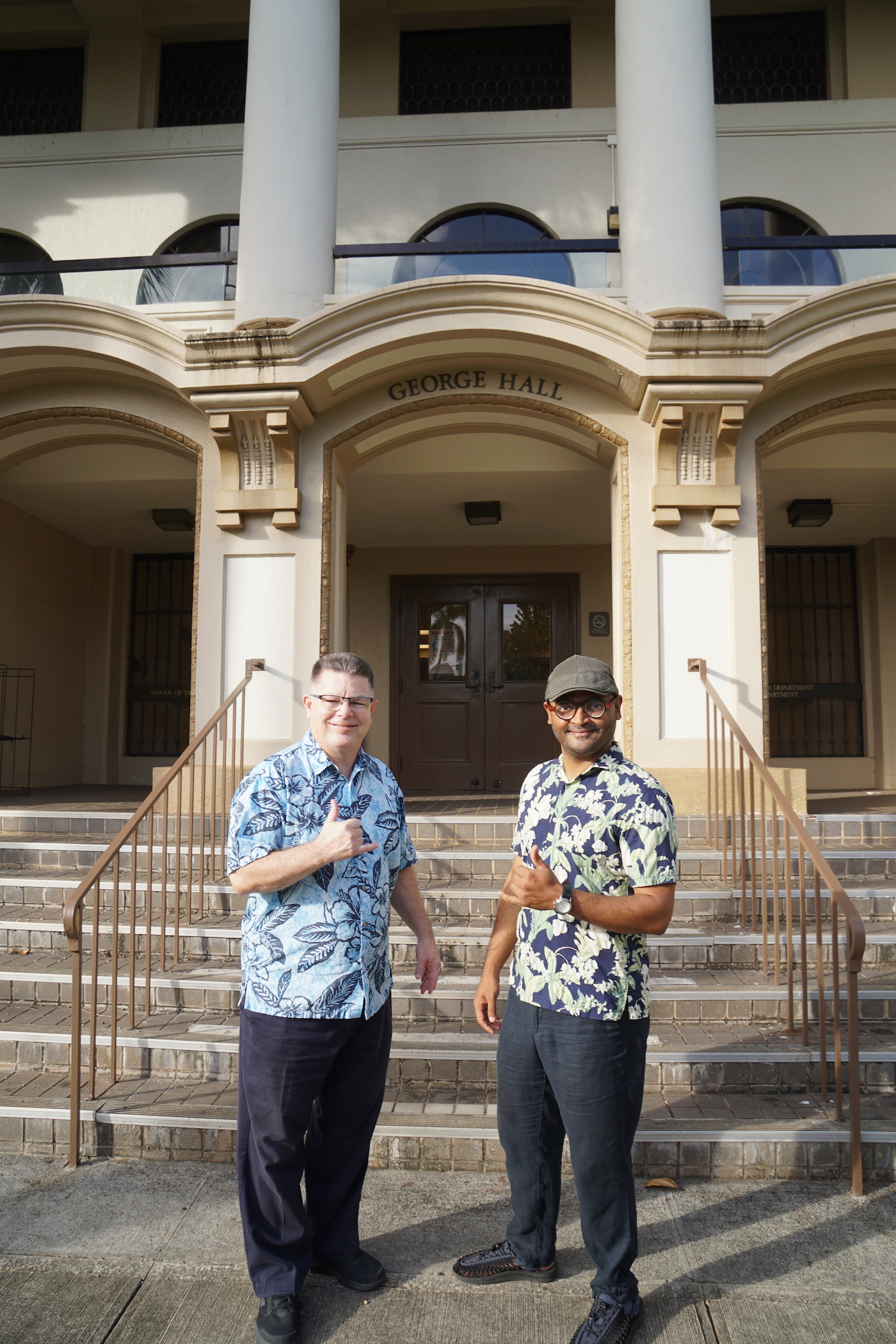 When he was a doctoral student at the University of Illinois, his own spark was ignited. Since the late Jack Welsh, who led General Electric (GE) as its CEO for more than two decades, was an alumnus of the university, GE executives were often on campus to recruit soon-to-be graduates. One day, Karhade’s advisor, Mike Shaw – who he deems his “academic father” – invited a GE executive to speak to his class.

Before he knew it, Karhade was sitting in on strategic planning meetings at GE and observing top-tier decision-making in action. Because of the relationships Shaw had cultivated, he was given access to unique data of 500 million investments the company made in information technology and co-authored a paper about it with Shaw.1

“Building trust and publishing papers takes years,” he said. “I started working on this paper for my dissertation in 2006 and it wasn’t published until 2015. All great things take time and effort.”

The engagement he was afforded with industry leaders and the invitation to contribute to real problems they were solving left a lasting impression on Karhade. Which is why it’s now the basis for his own teaching philosophy and something he strives to pass on to his students.

Instilling a spark in today’s students

Shidler College alumnus Spencer VanDerKamp, BBA ‘20, is one of Karhade's former students who was invited back to class this past fall to talk about ReelFresh, the company he launched after taking Karhade’s ITM 353 (Design) class in fall 2019. When VanDerKamp was in the course, he developed his idea for the app, which is now being used locally by consumers who seek out sustainable seafood from local fishermen. What started as an idea for a class assignment became a well-developed and fine-tuned business plan during the course.

Karhade invited staff from Shidler’s Pacific Asian Center for Entrepreneurship (PACE) center to listen and judge while VanDerKamp was presenting his project. PACE’s former director, Peter Rowan, then connected him to a similar company to share lessons and through that introduction, VanDerKamp became involved with PACE and its resources, which helped catapult ReelFresh to the next level.

“Thanks to the freedom we had in Professor Karhade’s class, we were able to work on any project that we wanted to and I chose to make it as applicable to the real world as possible,” VanDerKamp said. “I got the most out of the class and I hope my talk encouraged students to make the most of their time in school.”

The creative inspiration that VanDerKamp had in class is the same seed that Karhade hopes to plant for all his students. He says that ideas are born all the time from class projects or assignments and they can be implemented to solve real and urgent problems when the right components are in place.

“My intention with inviting Spencer back to class was to have that connection,” Karhade said. “This tells the students that it is possible and is happening around you to someone that was in your seat years ago and is now doing it.”

Ani Rajendra, a senior executive from Toyota, was another visitor to class this past semester. During Rajendra’s talk, he shared about how Toyota designs new products. He showed the students the “Hui Car Share” app, which allows users to rent a car by the hour or day from multiple stations across the island. Rajendra also told the class that Toyota values multilingual and multicultural applicants like themselves and encouraged them to apply for internships.

A fellow UH Mānoa colleague, professor Thao Le, from the College of Tropical Agriculture and Human Resources, was also invited to Karhade’s class to talk to students about the well-being of farmers and various technologies that can help enhance it. This conversation was a continuation of a collaboration between the two professors and resulted in a class project involving a payment system that could increase efficiency at farmers' markets.

Karhade was recently a guest lecturer in another colleague’s class after he bumped into TIM School professor Jerry Agrusa at the Mānoa Marketplace. After chatting about food delivery platforms, a research subject Karhade authored a paper on – and the one he presented during his interview at the Shidler College – Agrusa invited him to talk to his class. Karhade said he hopes that he and Agrusa author a paper2 together down the line on their shared research interest.

During class sessions, Karhade is always thinking ahead to how his current and past students’ successes could inspire future students. Alexis Dennis, BBA ‘21, is a former student who recently enlisted Karhade’s help when she applied for a job at Ernst & Young in New York. Through technology, he was able to help her prepare over Zoom.

After successfully landing the role, he invited her to talk with his students in order to inspire them to pursue their passions. And perhaps, once they are in the midst of their future careers, they too will be invited back to class to share that enthusiasm with the next generation.

2Kathuria, A., Karhade, P. and Konsynski, B., 2020. "In the realm of hungry ghosts: Multi-level theory for supplier participation on digital platforms," Journal of Management Information Systems, 37(2), pp.396-430.