Spencer Levy, CBRE’s head of research for the Americas, interacts with students during his presentation at the CBRE Capital Markets 2018 Hawai‘i Symposium

CBRE, the world’s largest commercial real estate services and investment firm, hosted a special symposium at the Shidler College of Business. The event was geared to help students gain a better understanding of the capital markets and featured a collection of distinguished professionals from across the U.S.

Spencer Levy, CBRE’s head of research for the Americas, opened the event with a fascinating presentation that had everyone pondering over what factors will truly effect the economy in the coming years. Levy tackled many hot topics such as the timing of the next recession and the impact of recent tax reforms. He also shared many interesting facts and statistics that provided insights into local, national and global trends.

“Recessions don’t start with a whimper. Recessions start with a thud,” explained Levy. “Are we going to have a hot war with North Korea or are we going to have a major debt crisis like we did in ‘97 - ‘98? All of those seem less likely...From the U.S. perspective, are we going to enter into a trade war with Canada? With China? With Mexico? I don’t think so ….. The only thing that could tip us into a recession on a ‘thud factor’ is something called a ‘Black Swan’ event. The unseen event,” he said.

On recent tax reforms, Levy had a positive outlook for Hawai‘i. “The single most important reason that I am not concerned about this is because the things that drove people to New York, California, Connecticut, [and] Hawai‘i before, still exist - A combination of having a high, deep pool of talented professionals, a live-work-play environment or other factors, such as infrastructure, that draw people in. Hawai‘i was an expensive place to do business before. It’s going to be an expensive place to do business tomorrow. The same positive driving factors that drove people here before are still going to be here, so I wouldn’t be worried about [changes in] S.A.L.T. (state and local tax).”

Other interesting forecasts that emerged during the symposium included a growth in local business and a slowdown in the trade of overseas goods due to automation, which has lowered the cost of producing goods locally. In the next 20 years, the number of Americans over the age of 65 will double boosting the healthcare industry into the number one spot above technology. And finally, the fastest growing cities in America will be determined by two factors – the presence of large talent generators (schools) and live-work-play environments. A combination of those two factors will trump the growth of cities with pre-existing infrustructures.

Inconspicuously seated amongst the audience, were the symposium’s eight distinguished panelists who helped facilitate a fascinating and informative discussion following Levy’s presentation. To assist students in better understanding the capital markets, the panelist shared their thoughts on where we are in the current market cycle, trends in the commercial real estate, insurance, retail, and hospitality industries, and how Hawai‘i contrasts with the U.S. mainland and the rest of the world.

The casual nature of the dialogue put both students and presenters at ease, allowing for fun interaction between both parties, including a spontaneous debate on which eateries serve the best cocktails in the rejuvinated Chinatown and Kaka‘ako neighborhoods. “Piggy Smalls, Bar Leather Apron, Bevy,” suggested the students. “I have to write this down. How do you spell Kaka‘ako?" said Levy, who was visiting from the East Coast.

The session ended with panelists sharing their personal career paths and encouraging students to try new things, pursue interesting opportunities, and to step out of the box and take risks.

The CBRE Capital Markets 2018 Hawaii Symposium was held on January 10, 2018 at the Shidler College of Business. It was open to all UH students, faculty and staff. CBRE Group, Inc. (NYSE:CBG), is a Fortune 500 and S&P 500 company headquartered in Los Angeles. It is the world’s largest commercial real estate services and investment firm. 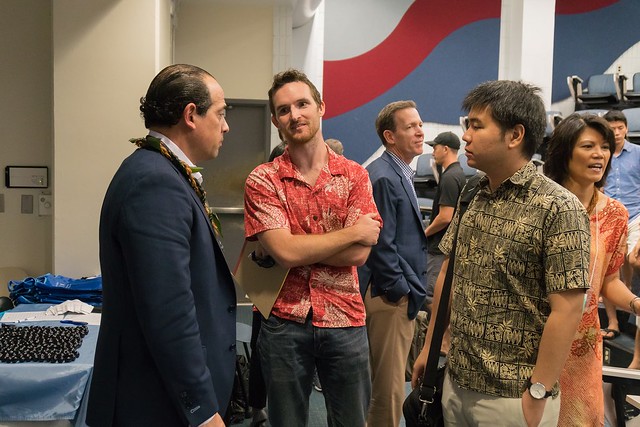