On February 7, the Shidler College of Business and the College of Social Sciences held an open forum and Q&A session with John C. Williams, president & chief executive officer of the Federal Reserve Bank of San Francisco.

Over 100 UH students and faculty attended the talk at Kuykendall Hall on the UH campus. During the session, Williams discussed the background and role of the Federal Reserve, examined issues facing the current U.S. economy, and considered how new technologies, bills, and policies will affect the future.

Williams also shared how he discovered his passion for economics, what he did academically and professionally to become successful in the economics field, and provided advice for students on how to prepare for the workforce.

Mahalo to Williams for taking the time to visit and share his experience, knowledge and advice with students and faculty.

Dr. Williams has been serving as president and chief executive office of the Federal Reserve Bank of San Francisco since 2011. His duties include serving on the Federal Open Market Committee, and posing his district’s perspective in monetary policy discussions in Washington.

Dr. Williams was previously the executive vice president and director of research for the San Francisco Bank, an economist at the board of governors of the Federal Reserve System, a senior economist at the White House Council of Economic Advisers, and a lecturer at Stanford University’s Graduate School of Business.

Dr. Williams received his PhD in economics at Stanford University, earned a master’s of science from the London School of Economics, and an A.B. from the University of California at Berkeley. His expertise includes: monetary policy under uncertainty; innovation; and business cycles. 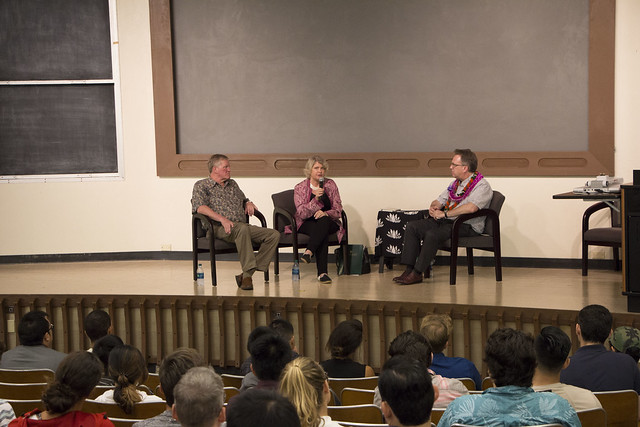