University of Hawai‘i to provide educational training to Vietnam

More than 60 people gathered at the Shidler College of Business on September 16 to commemorate the Memorandum of Understanding (MOU) signing between the University of Hawaiʻi and Vietnam’s Ministry of Foreign Affairs in charge of provinces (MOFA). Under the agreement, UH will provide educational and training programs for the provinces of Dak-Lak, Ha Giang and Ha Tinh. The total population of the three Vietnam provinces is approximately 6 million people.

UH has agreed to provide training in the areas of business, tourism, agriculture, English, and sustainable development, including reusable energy. UH’s Outreach College has agreed to coordinate units on the Mānoa campus, and other campuses across the UH system.

The signing ceremony included UH leaders, faculty and students, authorities of provinces in Vietnam, diplomats, and business representatives from both Vietnam and Hawai’i.

In a speech to guests, H.E. Nguyen Trac Toan, consul general of Vietnam in San Francisco, stressed the pivotal role of education in developing human resources and urged cooperation between UH and local universities in Vietnam. David Lassner, UH Hawaii president, acknowledged the signing of this agreement as another key milestone in the long-established and successful bilateral cooperation between UH and Vietnam, including a water resource management project and the successful Executive MBA program with Shidler. 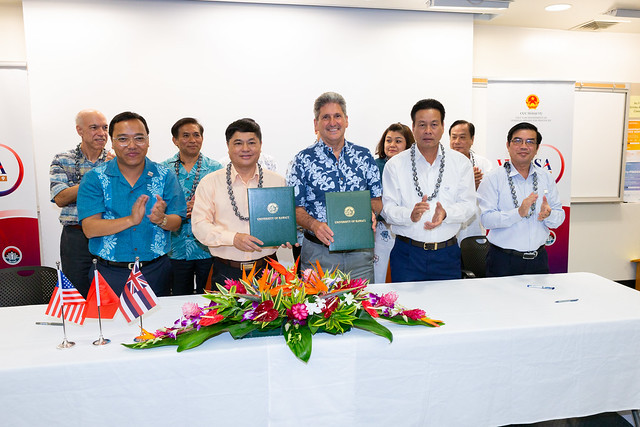